HomeNewsOrganization of the National Security and Defense Council of Ukraine02.06.2021, 07:52

Secretary of the NSDC of Ukraine Oleksiy Danilov participated in the meeting of national security advisers and foreign policy advisers to the Presidents of Lithuania, Latvia, Estonia, and Poland

From May 31 to June 1 this year, Secretary of the National Security and Defense Council of Ukraine Oleksiy Danilov paid a working visit to the Republic of Lithuania. During the visit, the delegation of the NSDC Staff took part in events dedicated to discussing topical issues of cooperation and promising areas for developing Ukraine’s relations with Lithuania, Latvia, Estonia, and Poland.

In particular, on the first day of his visit to Vilnius, the NSDC Secretary held a number of bilateral meetings organized with the assistance of Ambassador Extraordinary and Plenipotentiary of Ukraine to the Republic of Lithuania Volodymyr Yatsenkivsky.

During Mr. Danilov’s meeting with Chief Adviser to the President of the Republic of Lithuania on National Security Darius Kuliesius, the parties exchanged views on the current security situation in the region, in particular, in the context of aggravating danger on the Ukrainian-Belarusian border on the eve of Russia’s and Belarus’s joint command-and-staff exercise “Zapad-2021”, as well as the recent hijacking of the Ryanair aircraft in Minsk.

According to Mr. Danilov, since the previous meeting of the national security heads within the “Lublin Triangle” in March this year, the situation in the region has significantly worsened. “The events in Belarus have become a challenge not only for Europe but for the whole world”, - the NSDC Secretary said adding that the hijacking of the Ryanair aircraft in Belarus “has all the markings of Russia’s intelligence operation”.

“They are carrying out constant provocations, and if this is not noticed, they will move on”, - he said adding that Ukraine and its Baltic partners should “help build a democratic Belarus”.

To Mr. Danilov’s belief, changes in the current situation will depend on joint actions with our strategic partners and on “how strong we will be”. “We are an outpost and protection of the whole of Europe”, - he said stressing the importance of unity in resisting Russia’s hybrid aggression.

In this context, the NSDC Secretary underscored the importance of implementing Ukraine’s Euro-Atlantic aspirations, which is one of the main strategic tasks set by President of Ukraine Volodymyr Zelenskyy. “The course of joining NATO is a norm of our Constitution, and we must do everything possible to accelerate the achievement of the Alliance’s standards”, - Mr. Danilov said.

Moreover, Mr. Danilov noted that soon a new type of troops will be established in Ukraine - the cyber troops. “Challenges and threats in cyberspace today are much more dangerous than nuclear weapons, and the exchange of experience in this area is extremely important”, - he said adding that it is important to intensify cooperation within the cyber center in Kaunas.

In his turn, Mr. Kuliesius spoke in favor of strengthening the “agreed position of our countries in supporting Ukraine”. In particular, he stressed that the recent visit of President of the Republic of Lithuania Gitanas Nauseda to Ukraine “was very fruitful”. 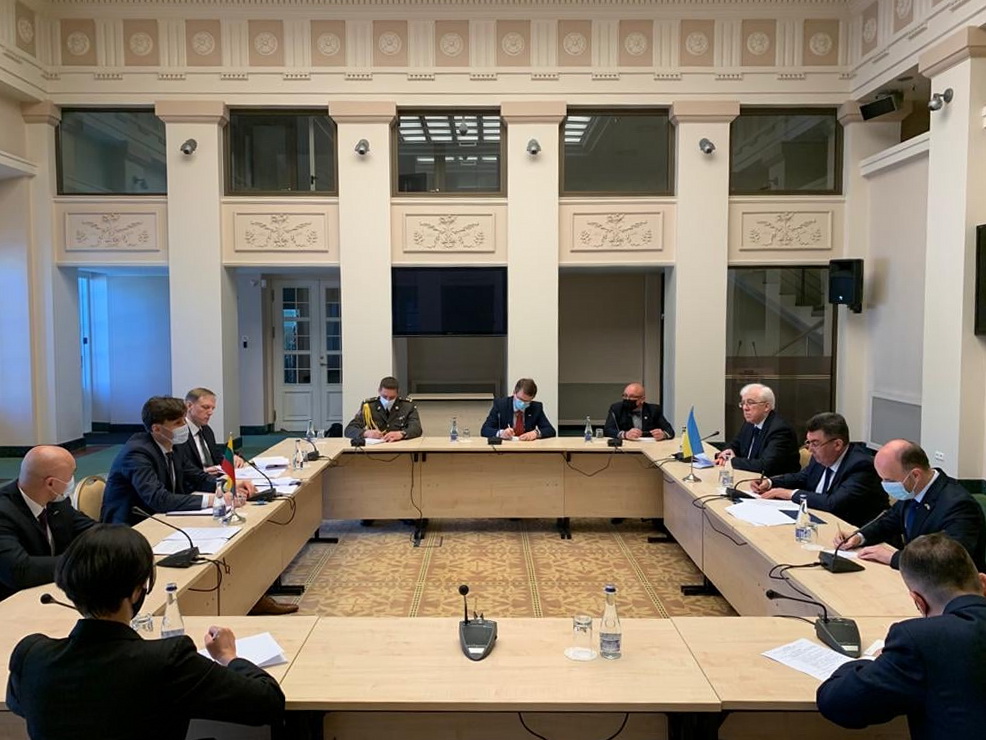 The Chief Adviser to the President of the Republic of Lithuania on National Security noted that Lithuania’s assessment of the security situation in the region “coincides with the position of the Ukrainian side”. In his opinion, Russia continues to demonstrate force, and Belarus is becoming a kind of proving ground for Russia.

Mr. Kuliesius supported the proposal to strengthen cybersecurity cooperation between our countries and also assured of the unwavering support of Ukraine on its way to NATO and EU integration.

During Mr. Danilov’s meeting with the Minister of National Defense of the Republic of Lithuania Arvidas Anushauskas, many practical issues of bilateral security cooperation were raised.

The NSDC Secretary expressed his gratitude to the Lithuanian side for the assistance provided, in particular, in the rehabilitation and treatment of Ukrainian soldiers wounded in the East of Ukraine. “We really appreciate the help that comes from the heart and soul”, - Mr. Danilov said.

The parties acknowledged that the practical cooperation between Ukraine and Lithuania has significantly deepened in recent years, in particular, in the exchange of experience with the Ukrainian military and their participation in joint military exercises with NATO.

Thus, according to Mr. Anushauskas, Lithuania plans to provide additional assistance to Ukraine for the needs of the Ukrainian army.

According to Mr. Danilov, Ukraine is interested in holding joint exercises with NATO “as much as possible”.

The NSDC Secretary also stressed the importance of strengthening practical cooperation in cybersecurity. In this context, he pointed out that Ukraine will “fully support the idea of ​​creating a cyber-NATO that can become one of the most powerful alliances” given the level of penetration of information technologies into all spheres of life of the state and the shift of confrontation from the conventional to the cybernetic field.

The Minister of Defense of the Republic of Lithuania, in his turn, stressed that Ukraine’s contribution to ensuring the security of the region is valuable, and “mobilization of international support for Ukraine” is important. 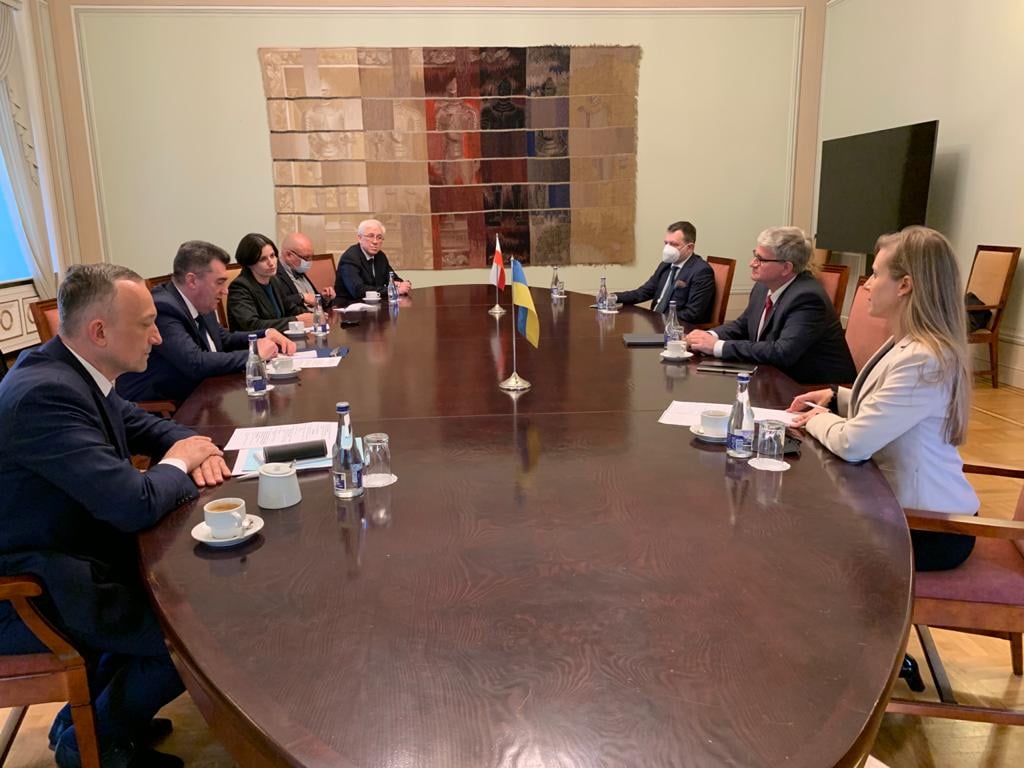 Secretary of the NSDC of Ukraine Oleksiy Danilov also met with Head of the National Security Bureau of the Republic of Poland Pawel Solokh.

The parties paid particular attention to the importance of supporting Ukraine in the run-up to the June NATO summit.

Mr. Solokh stressed that Poland will further support Ukraine in its Euro-Atlantic aspirations on all international platforms.

The parties also discussed the possibility of including the joint Lithuanian-Polish-Ukrainian brigade in official NATO documents with the possible further involvement of troops from other NATO member states in joint exercises with this brigade.

On June 1, Oleksiy Danilov together with Deputy Head of the Office of the President of Ukraine Ihor Zhovkva took part in the meeting of foreign policy advisers and national security advisers of the Presidents of Lithuania, Latvia, Estonia, and Poland with the participation of the delegation, during which the issues of the domestic political situation and security on Ukrainian borders were raised, in particular, in the context of the upcoming NATO summit in June this year.

The participants of the meeting also met with President of the Republic of Lithuania Gitanas Nauseda.