HomeNewsOrganization of the National Security and Defense Council of Ukraine26.02.2021, 09:24

As part of continued cooperation between the National Coordination Center for Cybersecurity at the National Security and Defense Council of Ukraine and the U.S. Civilian Research and Development Foundation (CRDF Global), the first inaugural coordination meeting of the National Cybersecurity Cluster was held at the NSDC Staff with the support of the U.S. Department of State. The event provides for regular meetings and roundtable discussions on specific topics related to the problematic issues of Ukraine’s cybersecurity, and the search for common ways to solve them.

Opening the meeting, Deputy Secretary of the NSDC of Ukraine Serhiy Demedyuk noticed that the main purpose of such an event is to strengthen coordination between government agencies, representatives of donor organizations, and foreign embassies with the greatest possible involvement of the public and private sector.

“The National Coordination Center for Cybersecurity at the NSDC of Ukraine today is a key structure that performs the functions of ensuring national security in cyberspace, and the establishment of effective public-private partnerships is one of its priorities”, - he said emphasizing the need to improve the legislative basis for public-private partnership in cybersecurity.

According to Mr. Demedyuk, the first meeting of the National Cybersecurity Cluster will serve as an impetus for further monthly meetings within this event, which will help to strengthen the coordination of all stakeholders to respond to emerging cybersecurity threats.

Regional Director, Eurasia at CRDF Global Duncan Thomson said that “cybersecurity has become a tool of diplomacy and defense”, and given this, CRDF Global has been actively involved in cybersecurity projects since 2019 to build effective and open relations with partners, exchange knowledge, improve the regulatory framework and enhance donor support. Moderator of the National Cybersecurity Cluster Oleksiy Baranovskyy stressed that such an event would help “gain synergies from the interaction of all stakeholders through ongoing dialogue”, in particular, in the issues of exchanging information on cyber threats, bringing Ukrainian legislation in line with EU norms and international treaties, spreading cyber hygiene and launching practical exercises. 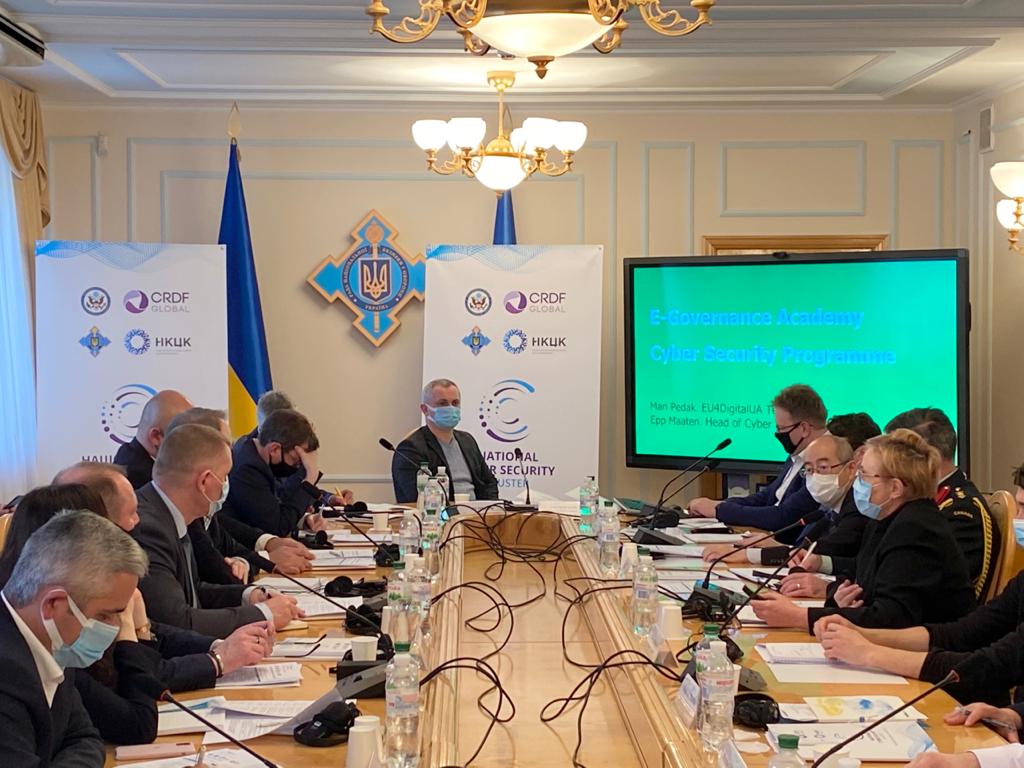 Speaking about the role of the National Coordination Center for Cybersecurity in Ukraine’s cybersecurity system, Head of the NCCC Support Service of the NSDC Staff Serhiy Prokopenko stressed that the Center’s capabilities were significantly strengthened by the Decree of President of Ukraine Volodymyr Zelenskyy of 28.01.2020.

“After the Decree was signed, it became possible to strengthen the coordination of the Center with the private sector, international partners, a basis for developing the technological platform for the exchange of information on cyber incidents was built, we have a technical base for cyber training”. “Last year, we worked out three big cyber incidents that posed a significant threat to national security”, - he added.

Summing up, Serhiy Demedyuk reported that the draft Cybersecurity Strategy of Ukraine would be approved and submitted for public discussion in early March.