HomeNewsOrganization of the National Security and Defense Council of Ukraine17.04.2014, 16:08

The Polish delegation led by the Head of the National Security Bureau of Poland Stanislaw Kozeiy visited Kyiv on the 16th of April, 2014.

"During the negotiations we discussed the possibility of more intense Ukrainian – Polish interaction in cooperation of Ukraine – NATO, in particular, through of Joint working group on military reform Ukraine-NATO. We also reached an agreement to intensify Joint military project of Lithuanian-Polish-Ukrainian Brigade", the Secretary of the NSDC of Ukraine Andriy Parubiy said.

During the discussion has been given appropriate attention to the issues of receiving of expert help from the Polish partners to improve the methodology of formulation of strategic documents on national security and defence, as well as to reform the individual components of the security sector of Ukraine.

The parties agreed to prepare and sign a Plan of cooperation between the NSDC of Ukraine and the National Security Bureau of Poland for 2014-2015 years in the near future. 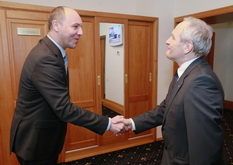 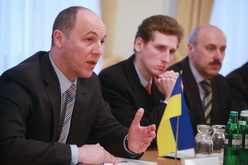 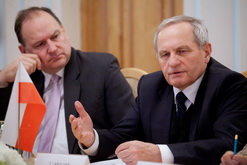